Our insect bait has been formulated with the blending of 17 ingredients, 4 of these being insect meals, from a fine powder to granulate in texture along with blended milk powders, yeast extracts, mixed spices and other organic compounds.

Amino Acids, vitamins and minerals along with other highly digestible components.

This is a very rich ingredient with a pungent aroma, high in protein, with a high nutritional value.

Each ingredient has its own role to play, from binding, gelling, firming, colouring, flavouring, sweetening, enhancing, stimulating, signalling, activating, creating a sensory response from the fish to feed.

The liquid profile of the bait has been achieved by blending natures natural liquid food extracts, a blend of six, along with essential oils.

The flavour profile of the bait, has been kept as natural as possible, incorporating two of nature’s natural identical flavours at very low levels.

The bait has an earthy, spicy aroma but its not an offensive odour.

The dark mottled appearance of the bait has been solely achieved with natures natural products, achieving the baits dark appearance.

The dark colour of the bait washes out slowly leaving a speckled appearance, blending in with river and lake beds.

The bait offers Carp and Barbel an alternative to fish meals as this bait does not contain any fish meal or other products of that nature whatsoever.

The baits design has been put together to mimic the Carp and Barbels natural diet.

This bait is highly digestible with a low natural oil level, mid to high protein, it has proved to be instantly recognisable as a natural food source.

The bait has been developed to be effective all year round but has proved to be extremely successful between the months of Spring to late autumn, especially on waters where there is a natural abundance of natural aquatic life forms.

The baits proved to be very effective on pressured waters along with all other venues.

Due to the time-consuming effort required to produce this bait, our stock levels at times may be low.

The insects we selected to manufacture this product have to be ground up in various stages, then blended along with other components.

There are no reviews yet.

Be the first to review “Insecto-Morph Glug” Cancel reply 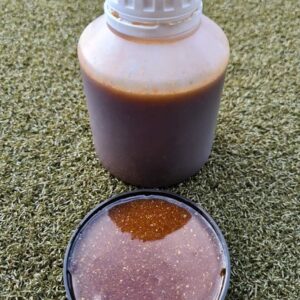